A relook at items of our past, focusing on the good and the bad.  To show where we have been and where we are going.  A game we looked at when it was on sale and picked it up. A dice rolling survival game in space.  Think of it as a digital board game with horror survival elements.

“Succeeding in Tharsis requires you to make the best of what you have, even if it happens to be a pair of snake eyes. Certain factors may be outside of your control, but that doesn’t mean they can’t be overcome. Tharsis is not a game about facing the odds. It’s a game about changing them.” – Steam Description

A dying spaceship with pieces missing, then more and more challenges happen to get you to the location. Think of it like the 2007 hit film Sunshine, where one mistake lead to most of the crew dying and then getting further and further down the spiral.

I will now try an explain the basics of the game, whilst keeping it interesting. Once you complete the tutorial, you get the 4 basic people you find on a ship.  The Captain, the mechanic, the doctor and the specialist. Each challenge will require special skills so if the initial 4 do not work for you – get to unlocking the others too.  At time of writing, I had unlocked the pilot and the technician. No I did not unlock the Cannibal.

Each character has special skills. Captain is good for cleanup – going into a module and then giving crew extra dice for following rounds. 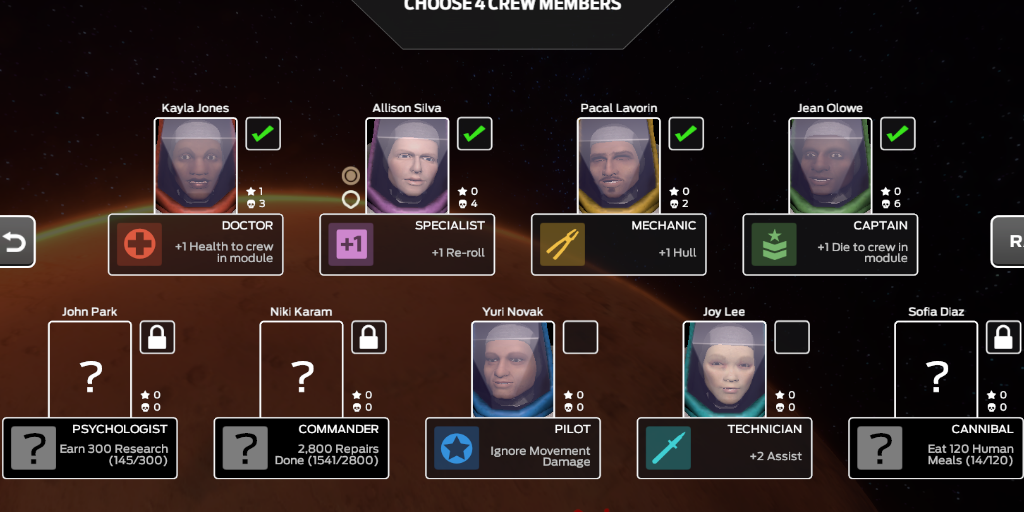 The Ship In Peril

So now you have picked your crew, its time to keep your ship alive to the conclusion.  Round by round, new challenges occur – where you have to meant the target number with your dice provided. For example in the picture below,  Moisture requires 7 score whilst Object Breach requires 25. So I can keep my Mechanic in the food module and roll the 3 dice (noted by the 3 squares on the meter above name).  Fingers crossed, you dont roll a 2 or a 3 – as both of those are events in the challenge.  Stasis – locked dice so you cant re-roll, Void – loses dice and Injury – causes the active crew to lose health.

Oops, you didnt roll enough. Best bring another crew member in – but that stops you from finishing other challenges – as you can only roll dice 1 for each crew member. Means 4 rolls.

Each module in the ship, like each crewmember has special extras that you can get from rolling well too. 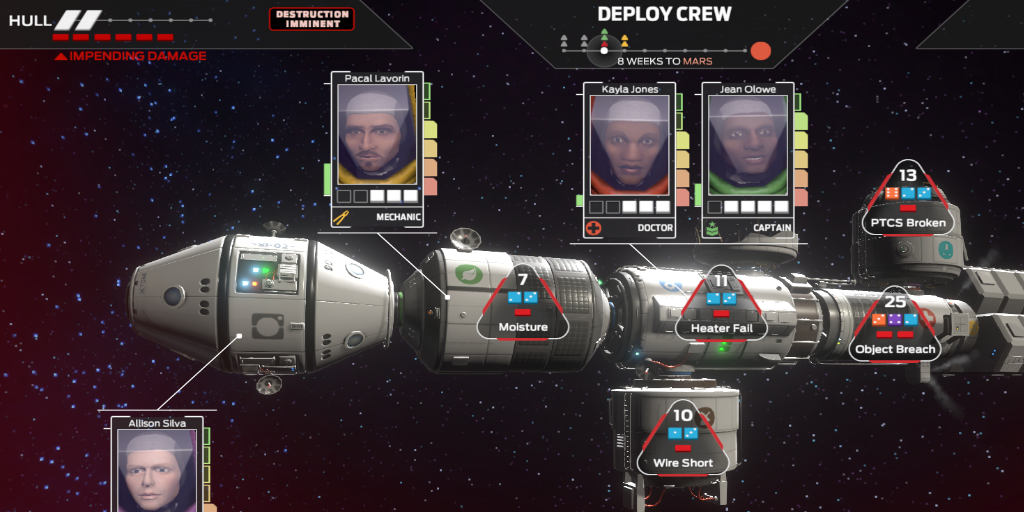 Dice replenish when you feed your crew. However food is finite. So you might later in the mission have to cut off fingers for extra rations or even kill off crew members. (We are not kidding)

Bloody hard. It is a great concept and its intuitive nature and how you have to complete the objectives is superb.  I have managed to complete it – on easy but normal and hard are still a challenge.

4/5 – Drop in score, only due to the lack of variable story scenes – can get repetitive.